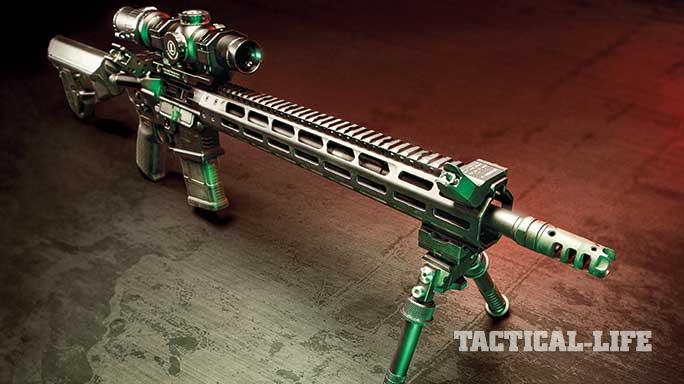 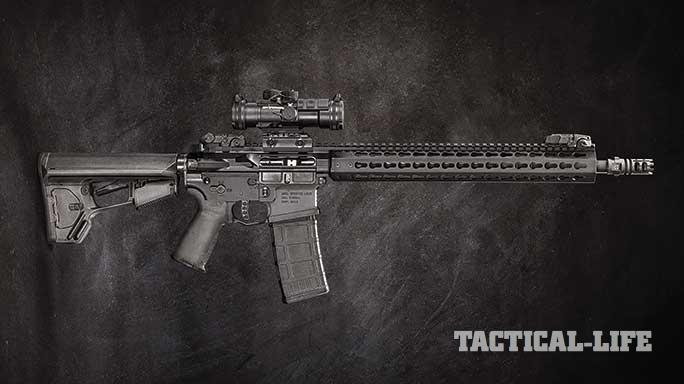 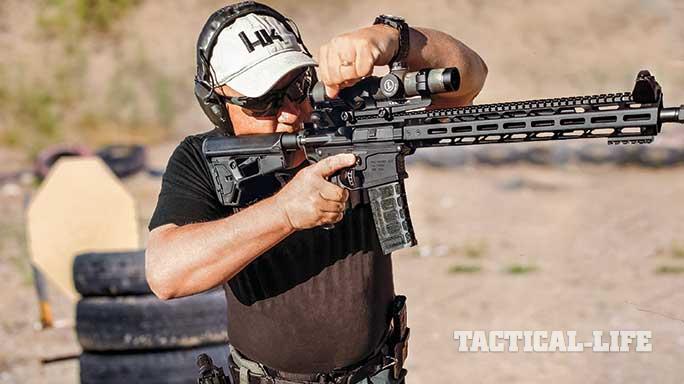 3 of 7
Grey Ghost Precision Specter Light
During testing, the Specter Light never missed a beat with any of the test ammunition from Black Hills, Aguila and Remington. 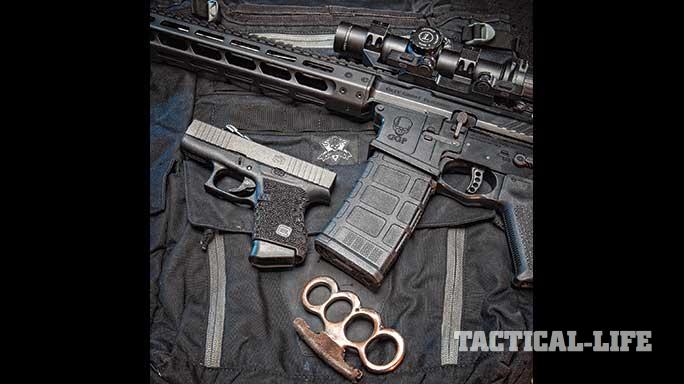 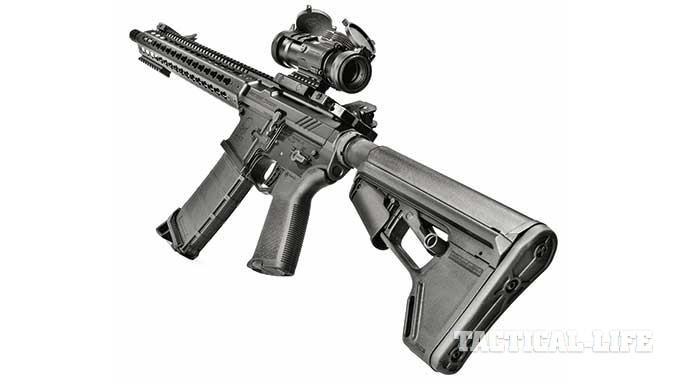 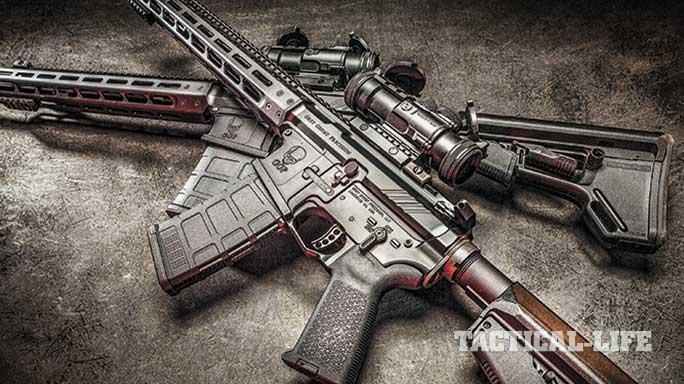 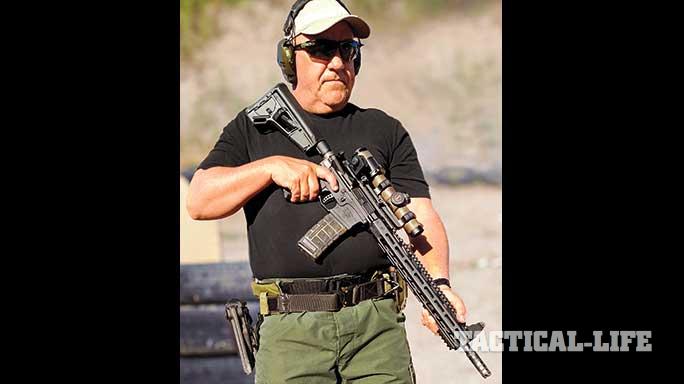 7 of 7
Grey Ghost Precision Specter Light
During some off-hand drills, the Specter Light performed well and was easy to transition from target to target. 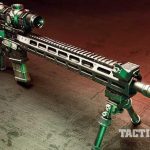 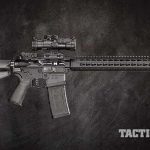 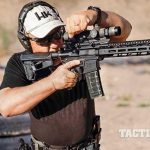 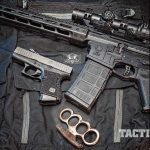 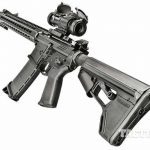 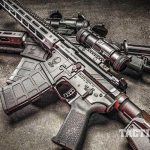 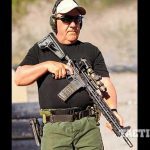 When a team of people who have “been there, done that” get together to design a gun, it’s worth taking a look at what is produced. This is the exact methodology Grey Ghost Precision used to develop its Specter series rifles. The team listed aspects of other guns they liked right beside what they did not care for. Lastly was the list of what was needed to make this dream gun happen. From those notes came the Specter Light in 5.56mm NATO.

The Grey Ghost Specter Light is built for Grey Ghost Precision by Mega Arms. Both companies are known for their exceptional quality and attention to detail, so this partnership was a winner from the start. And while Mega Arms mostly produces parts and receivers for other companies, this is the first venture where Mega Arms has built a complete rifle to a company’s specifications. The key points that Grey Ghost Precision makes about the resulting Specter Light rifles is that they are durable, reliable, affordable, accurate and attainable—all without compromising quality.

But the Grey Ghost Specter Light you see today wasn’t the first step in the build process. Grey Ghost Precision let an Army unit deploying to Afghanistan train with an early prototype rifle. The rifle was even taken through U.S. Navy Special Warfare Center training, where it was truly abused and tested. These soldiers provided real-time feedback on the rifle’s performance and durability during the training period. Once completed, the team provided a detailed debrief on the rifle to the engineers at Grey Ghost. Rifles were also sent out for evaluation to special operations marksmanship instructors, competitive shooters and some die-hard hunters with instructions to let Grey Ghost know what it could do improve the rifle. Because of the feedback received, the rifle evolved and is now in its fifth generation.

The primary goal of the Grey Ghost Specter Light was to create a real-world fighting rifle that would be as effective in home defense as it would in the Middle East. These rifles are about as far away from safe queens as possible. These guns are designed for hard use and everything that goes with it. With that in mind, the construction and materials that went into the Specter Light were well thought out.

The proprietary upper and lower receivers are forged from a billet of 7075-T6 aluminum before being Type III hardcoat anodized to military specifications with an impressive surface hardness of 60 Rockwell. The Specter Light’s bolt has also been high-pressure (HP) and magnetic-particle (MP) inspected. The enhanced extractor is made from casehardened 9310 steel. The gas key is properly staked and sealed to ensure a positive gas seal for years of hard use.

The Specter Light features a 16-inch, medium-weight barrel made from 416 steel with a 1-in-8-inch twist rate. The barrel sports an 11-degree target crown as well as 1/2×28-tpi threading, and a Lantac muzzle brake comes installed, though it would be easy to replace it with a sound suppressor. The barrel is black nitride coated and utilizes a mid-length gas tube.

Surrounding the barrel and gas system is a 14-inch M-LOK handguard that is very comfortable while still accommodating accessories as needed. The forend is hand-fitted to the upper using Mega Arms’ unique lockup system, which is significantly stronger than standard barrel attachments.

The lower receiver comes standard with an ambidextrous bolt release as well as a short-throw ambidextrous safety from Battle Arms Development. The single-stage trigger is very smooth and crisp with a pull weight of 4.5 pounds. Finally, the Specter Light comes with Magpul’s MOE+ pistol grip and an ACS-L buttstock riding on the buffer tube. In the end, the Specter Light is as good looking as it is reliable.

I have known the good folks over at Grey Ghost Precision for some time and was excited to shoot their Specter Light. My first impression of the rifle: It was designed as a true fighting gun. It’s well balanced with the extreme attention to detail I only find in guns designed by and for serious users.

To test the Specter Light on the range, I added a Leupold 1×6-20mm Mark 6 scope in a set of Leupold rings. I also added Dueck Defense’s offset iron sights. Lastly, I gathered a wide selection of ammo to run the carbine, including Remington’s 62-grain Premier Match HPs, Black Hill’s 68-grain Match HPs and Aguila’s 62-grain FMJs.

It didn’t take me long to get zeroed and on target. While I was focusing on shooting five-round groups at 100 yards, I noticed a few things immediately. One of the “make or break” components of any gun is the trigger, and here the Specter Light did not disappoint. As I said earlier, the trigger had a clean break and a short reset, and the pull weight of 4.5 pounds seems perfect for a fighting rifle.

The second thing I noticed was the rifle’s balance, which helped minimize muzzle rise as the shooting continued. Your ability to stay on the scope is crucial to fast and accurate follow-up shots. Contrary to what might be done with some guns, I shot the five-round groups at a decent pace—not rushing by any means, but not lagging between shots, either. It was very easy to fire a shot and immediately reacquire the target. In other words, since I knew the Specter Light was designed as a fighting rifle as opposed to a bench gun, I wanted to see how accurate it could be under pressure, and it did not disappoint.

The Remington Premier Match ammo delivered the best group at 0.75 inches followed by Black Hills at 1 inch and then the Aguila load with a 1.5-inch group. The shots were taken off of a range bag with no rear support. I believe the rifle is capable of even tighter groups with a slower pace, a bipod and a rear sand sock.

The Grey Ghost Specter Light handled well during a barricade course. Everything I experienced during the precision shooting section of the test translated directly over to the dynamic application side of the test. The great trigger allowed for quick shots on multiple targets with above-average accuracy and speed. Having both the Leupold Mark 6 and the Dueck Defense offset sights helped the process quite a bit by making it easy to transition from close to far targets. While I don’t think you could consider this a torture test for reliability, the Specter Light ran the entire session without any malfunctions. The only maintenance performed was the application of some Wilson Combat Lite oil prior to our testing. The Specter Light certainly showed its lineage and design core during the testing.

The Grey Ghost Specter Light proved to be the gunfighter’s rifle it is proposed to be. The partnership between Grey Ghost Precision and Mega Arms has produced an exceptional rifle. Or, as Grey Ghost Precision stated, “Ultimately, the first full-production Specter configurations are a reflection of who we are and what we’d want to take into a fight. First and foremost, these are combat rifles. Although they are very accurate, they can be banged around, used and abused, all while maintaining intransigent reliability. They are crafted to discriminating specifications, and we are supremely confident you are going to appreciate the attention to every detail on these rifles.”

The Grey Ghost Precision Specter Light began its life as some scribbles and notes on a napkin, and after some serious research and development, a rifle that lives up to the demands and requirements set forth by its designers was born. It is rare to see a company so eagerly put out its initial product to shooters who would most certainly do everything they could to find fault with the product. Yet that is exactly what Grey Ghost Precision did. Through this forging process, all of the problems and issues were burned away. What remains is a rifle that is built by gunfighters for gunfighters.

This article on new guns was originally published in the October/November 2016 issue of ‘Guns & Weapons For Law Enforcement’. For information on how to subscribe, please email [email protected]outdoorgroupmags.com or call 1-800-284-5668. 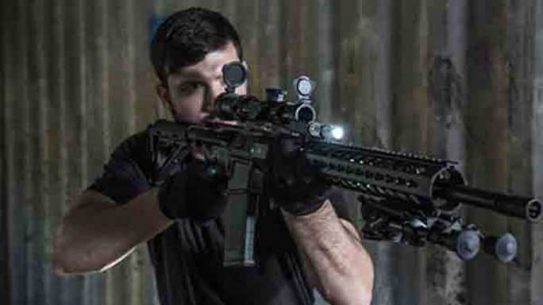 Live life on the edge with three new Firefield Edge rails, which combine an...